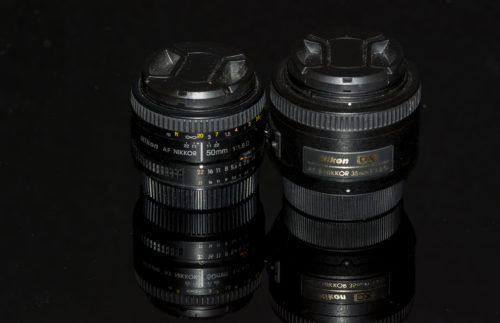 Deciding between 35mm versus 50mm prime lens can seem a hard decision to make – especially for the newbie photographer buying their first prime lens.

It needn’t be difficult and I will show you an easy method to decided which will suit your needs best by using your 18-55mm kit lens.

Before I go any further let me just say that kit lens are extremely good lenses and the name “kit” seems to conjure up a product that is considered inferior.

This is simply not true as I have taken some award-winning photos with my kit lenses.

The only difference between a kit lens and any other lens is in the build quality.

You bought a roll of 35mm film (pictured right) and inserted it into the camera.

All the negatives of that roll of film were produced at the same size – IE 24mm x 36 mm.

The standard “kit lens” in those days (IE the lens that came with the camera) is a 50mm – as per the photo centre right.

There were other film sizes such as 126, 4×5 etc and in all cases the film size referred to the size of the negative.

Life was simple until the introduction of digital photography.

The first digital camera’s that were produced came with a 35mm sensor to equate with the film cameras.

But these large sensors proved extremely costly to make and very difficult to sell to consumers as a result.

The solution was to make a smaller sensor – which they called a crop sensor. The original sensor size was referred to as a “full frame” as it duplicated the old 35mm camera film strips in actual size.

With the introduction of digital photography film became obsolete (much like the dinosaurs and Kodak!) and was replaced by sensor size.

The sensor is effectively the new “film” as it is the sensor that records and transfers the image onto your memory card.

Nothing too complicated there but …

Consumers now had the option of a Full Frame (FX) or a Crop Sensor (DX) camera – the latter being a smaller sensor and a smaller body.

Suddenly a 35mm or a 50mm weren’t the same when fitted to different bodies and a whole new learning curve was needed.

The equivalent of a 35mm film camera coupled with a 50mm focal length lens in today’s digital world would be a Full Frame (FX) camera body with a 50 mm lens.

But a 50mm lens on a DX (smaller sensor) body equates to a 75mm to 80mm lens.  Enough to confuse almost anybody!

IMPORTANT: It is important to understand that all lens sizes are based on a Full Frame (FX) body but don’t produce the same size image on different sized sensors.

The vast majority of photographers today have cropped-sensor (DX) models. To complicate matters still further cropped-sensor sizes differ slightly from one manufacturer to the next.

Nikon is different to Canon for example. The multiple of one is 1.5 and the other is 1.6.

You probably know all this stuff already but roughly speaking the difference between a crop-sensor (DX) and a full-frame (FX) is a factor of 1.5 times. This means that to get the same result as a 50mm lens on a Full Frame (FX) body you need to attach a 33mm lens on your crop sensor (DX) – 50mm / 1.5 = 33mm but there is no such thing as a 33 mm lens so we simply use a 35mm on a crop sensor (DX) to approximate the old 50mm result.

No? – well it doesn’t really matter

Regardless of what size body or sensor you have determining which focal lens suits you best can easily be worked out using our kit lens.

Your 18mm – 55mm kit lens will tell you which focal lens prime will best suit your needs.

You probably aren’t even aware of it but you may have already been photographing at your preferred focal length.

Way back in the “film” days 50mm was determined to be the most appropriate/comfortable/realistic focal distance for everyday photography.

Nothing has changed and I would be surprised if you weren’t falling back into this “default’ setting quite naturally – IE either using a 50mm lens on a full frame (FX) or a 35mm lens on a crop sensor (DX).

It just seems to work that way.

There is one sure way to determine whether you should invest in a 35mm or 50mm prime lens.

Zoom With Your Feet ... naturally

Zooming with your feet means moving closer to or further away from your subject as the situation demands – as opposed to standing in the same spot and zooming in or out.

More importantly it is what you will have to do once you have bought your new 35mm or 50mm prime which won’t have a zoom option.
Here’s what you do to determine the best of the two focal lengths for you.

After two weeks you will KNOW if the 35mm or 50mm suits you best it will be the one you are most comfortable with.

You can now go out and buy your first prime with confidence.

I have yet to find a better, more personal way to determine exactly what each individual’s needs are.

The 35mm vs 50mm prime lens argument goes on all the time in forums and camera clubs. And of course it doesn’t end with the 35mm and 50mm lenses either.

When reading and listening to these arguments remember two things:

I did this exact exercise and at the end determined that a 35mm was the best fit for my Nikon D7100 (DX) body and my preferred genres.

Let me know how it goes and do tell me what you decided to buy.
Leave a comment below.